Searching for Sharks for Discovery 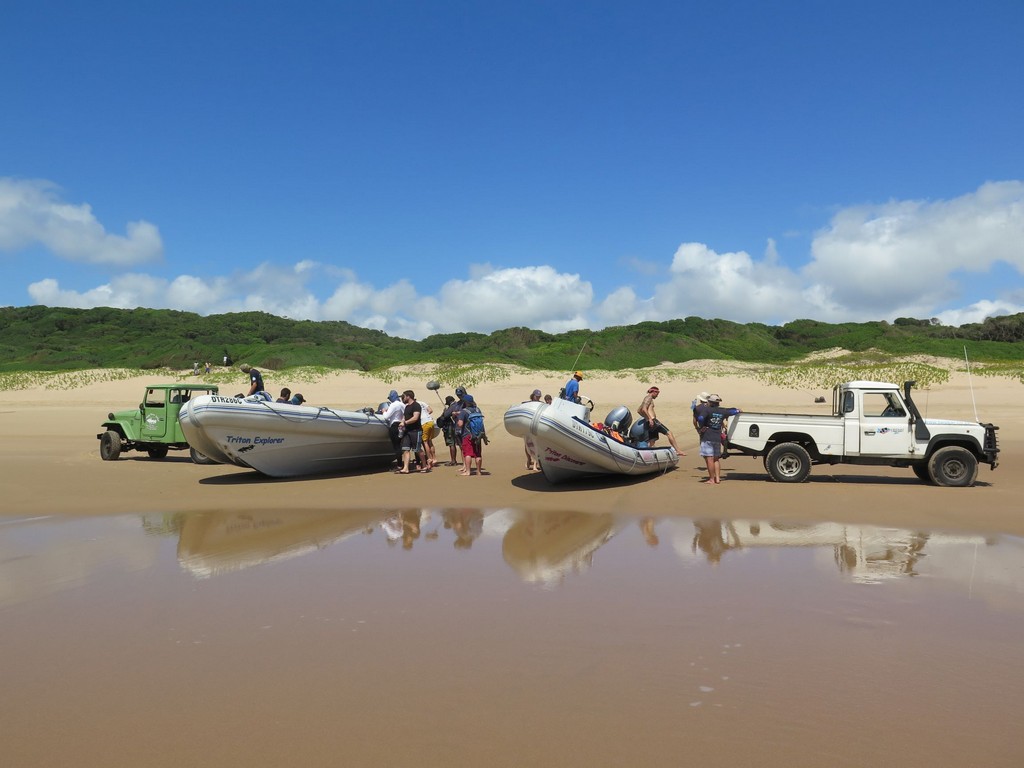 In January 2020 we had the privilege of assisting Discover Televisions filmcrew producing a show for none other than shark week!  The shows name is Extinct or Alive, shown on Animal Planet and the team of divers are headed up by wildlife biologist and animal tracker Forrest Galante.

As the only dive operator with experience of working from the remote area of Bhanga Nek which is just south of the Kosi Bay River mouth on the Mozambique border, we were fortunate to be involved in some high adrenalin launches and diving for Forrest and his team.  They had a tough agenda looking for species that had only been spotted once and decades ago including; whitetip weasel shark (paragaleus leucolomatus), ornate sleeper ray (electrolux addisoni), eastern shyshark (haploblepharous kistnasamyi) and flapnose houndshark (scylliogaleus quecketti) It was he whitetip weasel shark that had been fished out once from the beaches at Kosi Bay that the team hoped to see but any sharks would make great footage.

We have to take the boats up by sea as the access by sand roads is too rough for them to go by land, its quite a distance and we pray for favorable conditions to get the 2 superducks heavily laden with cylinders, dive gear, fuel and provisions some 80 kilometres up the magnificent and untouched Elephant Coast to beach just South of the Kosi Bay Mouth and Mozambique border where they will be met by the ground crew and vehicles.  The beach homes the oldest turtle research station in the world which was busy with scientists monitoring the laying and hatching of Leatherback and Loggerhead Turtles, for this reason we had to camp (a first for us as we normally stay on the beach in the research house) and stay off of the beach at night so as not to disturb the turtles.

Because we have worked launching from this pristine remote beach before we knew we were in for some hair raising launches but that didn't daunt us I was particularly looking forward to taking the crew to a deep reef that comes up to 34 metres to a pinnacle and drops away into deep water.  Whenever we have worked within the sanctuary areas with permission of course our high point was always to get a few dives in on this very secret sharky reef.  On one dive I had seen hammers, tigers, bull sharks, silver tips and a nurse shark, but we always had to twist the scientists arms to go there.  But this time it was different we were actually looking for the sharks!  We had heard tales of a spear diving spot just inside SA waters but although we spoke to people who had dived there it was from times before GPS and no one had marks.  We decided to make it our mission to find this mythical reef ourselves!

The show is produced by Discovery Channel and is about rare species thought to be extinct and the search for sharks along the Elephant Coast.
It was so good to be diving close to the Kosi Bay Mouth again and to check the pristine reefs within the sanctuary. We set up a base camp to set up gear and to plan the days various shoots. The crew was picked up every day as they transferred across the lakes from Kosi Bay to launch with us through the surf at Bhanga Nek.
After months and months of amazing visibility and calm waters this one week in January saw the ocean turning green and murky and although our deep reef was known for strong currents I have never witnessed such a current in this stretch of water it was insane.  Because of the hectic currents getting the film crew down to the correct spot with all of their cameras and their full face masks for comms was near impossible but we tried, "oh my" we tried but the conditions were extreme.  The film crew got decent footage of the cheeky silver tips buzzing us and on one day Donald and myself went on our own and we saw and filmed the biggest tiger he has ever seen and he has seen plenty!  there was no doubt the sharks were there but a wise man once told me that Posiedon can only reward those who are patient and we simply ran out of days.  We saw Tigers, Bull Sharks, Silver Tips, an Oceanic White Tip, a Spinner Shark and we think a Great White, if only the conditions had improved!  The crew were very happy with the gnarly footage that they did manage to get and after visiting Alliwal and Protea they had all they needed for an epic show.  And we will definately be revisiting to try again for another show.

Oh but we did have an off day and we did find the elusive mushroom reef and it was epic and we will certainly be back as soon as the opportunity arises.

We look forward to the sardine run to continue working with sharkweek.

.
We thank Isimangaliso Wetland Park for granting permission to the film crew to film and work in this beautiful area.