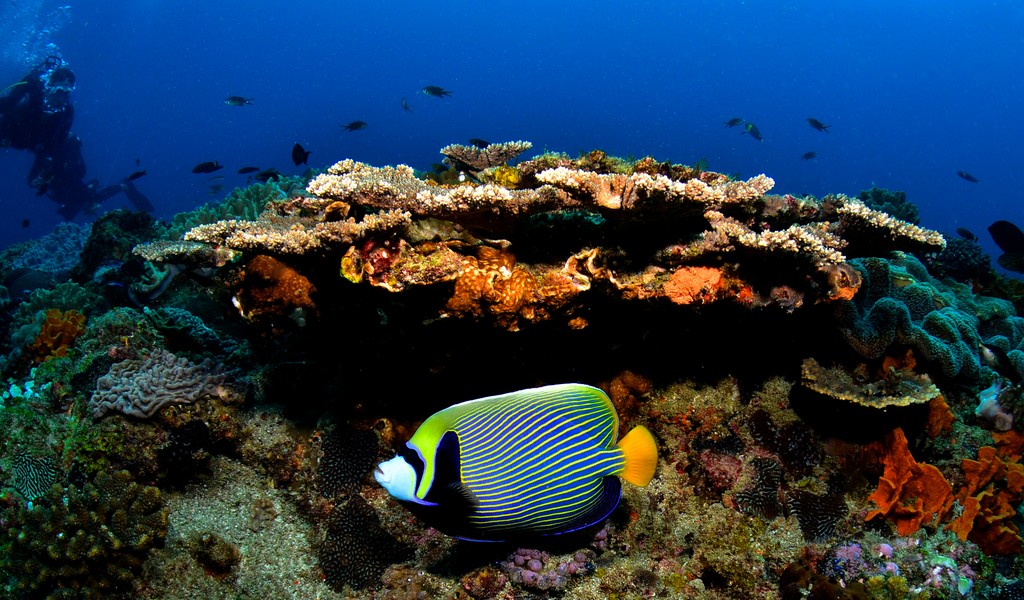 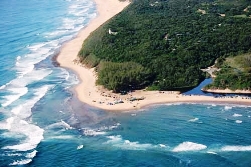 The Agulhas current brings warm clear water to the east coast of South Africa where corals have colonised submerged fossil dunes and rocky platforms in a series of reefs from Cape Vidal in northern KwaZulu-Natal into southern Mozambique. Sodwana Bay in the Greater St Lucia Wetland Park, a world heritage site, has several accessible reef complexes. This is a summer rainfall area (average annual rainfall 1100 mm) with a subtropical climate, summers are hot and winters mild. The average water temperature in summer is 26.4°C and in winter the mean water temperature is 22.4°C .

The coastline runs in a north easterly direction and winds are mostly north easterly or south-westerly. Wave action in Sodwana Bay is onshore and divers access the reefs by skiboats launched through the surf. Several submarine canyons occur along this stretch of coast and the current sweeps sediment offshore via these canyons. The abscence of any large rivers ensures clear water with visibility ranging from 15 to 40 m. The southern locality and cooler waters of Sodwana has protected the reefs from the mass coral bleaching phenomena experienced by more tropical locations.

The reefs of Sodwana are composed of ridges and gullies with pinnacles and drop-offs at some sites. As Africa's southernmost coral reefs, Sodwana hosts diverse biological communities and divers can see both tropical species and species adapted to cooler water.

The coral carpets are composed of brightly coloured soft corals, fragile hard corals and support more than 800 species of fish and all kinds of other marine creatures from nudibranchs to mantis shrimps.

Soft corals such as mushroom, leather and thistle corals dominate reef crests whereas gullies are characterized by hard corals such as staghorn, honeycomb and plate corals.

Diving in Sodwana Bay is good all year round. The summer months can be hot and humid. In our opinion the ultimate month for diving conditions is May. During the summer months we are fortunate to have plenty of whale shark sightings as well as an opportunity to dive with pregnant female Ragged Tooth sharks who spend a month or two here on their migration past Sodwana. During the winter humpback, southern wright and Minke Whales migrate through our waters.

Winters can be cool in the evenings. Our rainiest time is around February when we experience late afternoon thunderstorms. 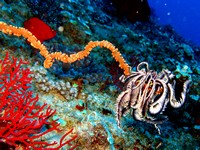 The most frequently dived reef complexes at Sodwana Bay are the two, five, seven and nine mile reefs. These complexes are named after their distances from the launch site. Each complex has many different dive sites with as many different habitats and life forms on it. Interspersed between these are many secret less frequently dived special nooks and crannies. Let us show you where they are and what they have to offer. Most reefs at Sodwana lie between 12 and 18 metres with some special 30 metre spots that are really worthwhile diving on.

For the nitrogen junkies we have a number of awesome dive sites between 50 and 100 metres which will blow your mind, so don’t get left out. 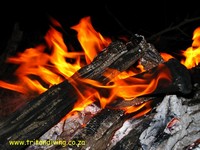 Sodwana Bay is situated in northern Kwa-Zulu Natal, South Africa. We are approx. 75km south of the Mozambique border. The closest towns to us are Hluhluwe (82km tar road) and Jozini (56km gravel road). Durban is 370km (3,5 hours) south of us and Johannesburg is 640km (7 hours) west of us. Mbazwana village is 4,5 km from Triton lodge.

Please note there is no beach front accommodation available along this entire stretch of coastline.  The beach front falls within the iSimangaliso Wetland Park World Heritage Site and is therefore a protected area.

Please be advised that if you are following a GPS most direct route do not turn off through Mkuze unless you are driving with a 4 by 4 as the roads are not good.  Rather carry on along the N2 and take the Hluhluwe offramp.

When approaching from the Hluhluwe side as you come into Mbazwana you will come to a traffic circle with a building with a thatch roof on your right hand side. Turn Right (3rd exit) and follow the road through to a second traffic circle where you turn right (3rd exit) again which will be the Sodwana Bay road. Keep going for approx. 4 km, when you will see our large brown signboard "Triton Dive Charters and Lodge ", you must turn left.  It is a sand road so if you are not driving a four by four vehicle keep to the right hand road (Go under the Triton Dive Lodge white sign board) and follow the road for 1.3km.

The road is suitable for 4x4 as well as 4x2 vehicles. Please note however that the sand road can become quite tricky in some places if we have not received rain for a long time and this can make it challenging to drive very low sedans on our road.  Contact us to enquire about the condition of our road prior to arrival.  During day time look for the thatched roofs on your left and at night you will see a reflective sign with red lettering which indicates that you have arrived.

Triton Dive Lodge is situated 4.1 km’s from Mbazwana on the Sodwana Bay road +-12 km’s from Sodwana Bay Beach which is about a 10 minute drive from our lodge .